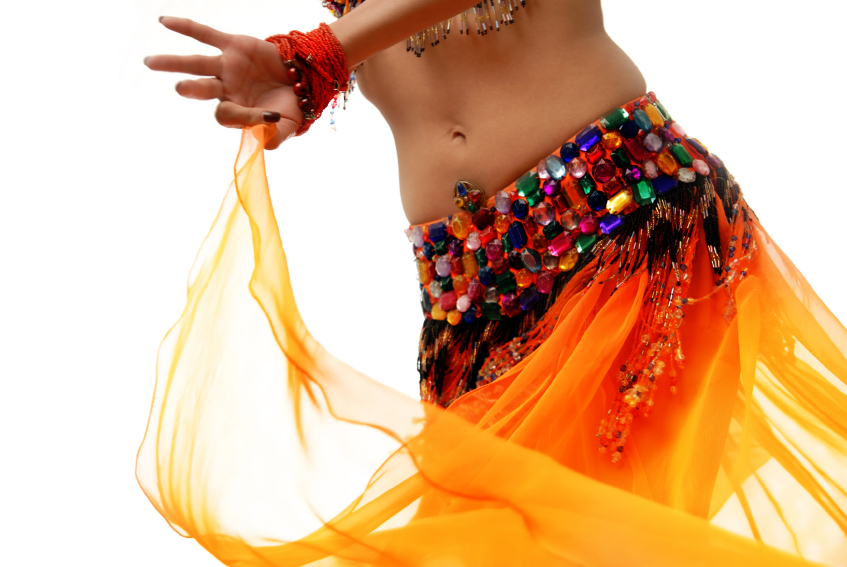 As with many varieties of dance, belly dancing evolved from a ritual dance to become the form of cultural expression it is today. Stemming from the Middle East, it first appeared in the U.S. at the Columbia Exposition of 1893 in Chicago. Americans have been mesmerized by the beautiful dance form ever since.

Mona N’wal, a belly dancer and instructor of 30 years (madisonmultidance.com), breaks the movements of belly dancing into four main components: percussive movements on tempo, circular or figure eight movements, undulations, and shimmies. She says the “fun part is layering”these movements to create a visually appealing dance.

Besides the movement, what really hooked her to belly dance was the music. Middle Eastern music is very linear and light in comparison to the very compact and heavy American music. However, it is close in style to jazz, in that it takes a main melody and riffs on it. Mona stresses that the music and the dance are incredibly intertwined.

“The dancer tries to be a visual expression of the music,” she says, “Traditionally, certain instruments call for certain movements.”

Although not all belly dancers adhere strictly to which movements correspond to which instruments, there is a basic guideline to use. That is, drums call for hip and foot work; violins call for swaying; stringed instruments call for morevibration, and flutes call for breathy movements.

With these foundations of movement and music together, choreographers can begin to combine them in ways that tell a story. Belly dance can not only express great joy but also great sorrow. It is important to try to translate lyrics of a song to accurately create a dance for it, Mona notes.

“It’s about absorbing the music and the idea and reflecting it back in movement, “she says.

The idea that Middle Eastern dance is solely a seductive dance is an inaccurate stereotype. The costumes with the bra top, pants and veil only came about in the1920’s. The veil began as a flirt with the laws of reveal and conceal in Egypt. Therefore, it is important to remember that belly dance is first and foremost a folkdance.

Props used in belly dance are also reflections of Middle Eastern culture. The cane is the women’s way of poking fun at the Egyptian men using bamboo staffs for defense. (The sword is strictly an American addition.) The finger cymbals, often thought of as an accessory, are really an instrument. While the performer is
dancing, she is also playing a part in the orchestra with the cymbals. Thesesometimes go along with the movements and sometimes not. Finally, the Shamadan (candelabra) worn on the head started in the late 1800’s when a belly dancer put a candelabra on her head while leading a wedding procession.

Being a professional belly dancer in the Middle East made the woman a bit of an outsider. Everyone wanted the famous dancers to entertain at their weddings and celebrations, but no one wanted their daughter to become a belly dancer. Because of this mentality, many professional dancers often quit dancing when they got married.

As with theatre, decent women were not supposed to dance in public. So, originally young men were the professional dancers. Men also danced privately in homes and at parties. These were safe places for nonprofessional women to dance as well. The dance has since grown and modified. Even within the Middle East there are vast differences. Egyptian dance is very constricted by its modesty laws, whereas Turkey is influenced by Western culture, showing much more skin.

Although modern dancers now fuse belly dance, techno, and hip-hop, the foundational moves remain the same. Mona maintains that it is a very self-expressive dance form which takes time and patience to master.